Richard Crangle, Mervyn Heard and Ine van Dooren (eds), Realms of Light: Uses and Perceptions of the Magic Lantern from the 17th to the 21st Century 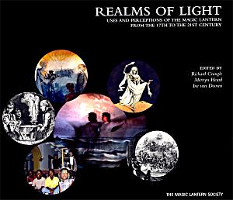 Thirty-two essays by leading writers in the field present a rich and varied series of views of a still little known medium, enlivened by over 280 illustrations.

Realms of Light is organised in four interrelated and overlapping sections, covering the main areas of lantern use, its applications in different cultures, examples of particular use and, finally, the lantern’s continued influence after the exaggerated reports of its ‘death’ at the end of the nineteenth century.

This is an exploration of a fascinating history, but one which emphasises the lantern as a living medium that still plays a role in the culture of today.

SECTION 1: Devices and desires: some themes and strands of lantern history
Mervyn Heard, ‘Now you see it, now you don’t: the magician and the magic lantern’
Mike Simkin, ‘The magic lantern and the child’
Jens Ruchatz, ‘Travelling by slide: how the art of projection met the world of travel’
Vanessa Davids, ‘Nudes and more: a short description of a pornographic lantern slide collection’
Mervyn Heard and Richard Crangle, ‘The temperance phantasmagoria’
Stephen Bottomore, ‘A word paints a thousand pictures: the magic lantern in language and metaphor’
Helen Weston, ‘In the eye of the artist: the lanternist’s image in visual representation

SECTION 2: Projection International: The lantern in different national contexts
Mike Simkin, ‘Birmingham and the magic lantern’
Wendy Bird, ‘Enlightenment and entertainment: the magic lantern in late 18th- and early 19th-century Madrid’
David Francis, ‘The AOUW: or, what collecting lantern slides may turn up’
Helen Weston, ‘The light of wisdom: lanterns and political propaganda in Revolutionary France’
Terry and Debbie Borton, ‘How many American lantern shows in a year?’
Daan Buddingh, ‘A peep into history: the 19th-century magic lantern in the Netherlands’
Ian Edwards, ‘The Edwards family visual archive, 1898-2005: a century of magic lantern use by one Australian family’

SECTION 3: People and Places: case studies of the lantern in use
Hauke Lange-Fuchs, ‘Samuel Reyher of the University of Kiel: the first audio-visual lecturer?’
Lester Smith, ‘Entertainment and amusement, education and instruction: lectures at the Royal Polytechnic Institution’
Jeremy Brooker, ‘Paganini’s ghost: musical resources of the Royal Polytechnic Institution (1838-1881)’
Hauke Lange-Fuchs, ‘For kings, princes and nobles: some early uses of the lantern in the world of government’
Edwin Dawes and Mervyn Heard, ‘M. Henry’s dissolving views’
Mark Butterworth, ‘A lantern tour of star-land: the astronomer Robert Ball and his magic lantern lectures’
Richard Crangle, ‘Mission unaccomplished: W.T. Stead, Charles W. Hastings and the Magic Lantern Mission’
Stephen Herbert, ‘A slice of lantern life: lantern presentations in and around Hastings in early 1881’

SECTION 4: The lantern is not dead: lanterns and slides in the 20th century and beyond
Peter Gillies, ‘Slides for advertising and propaganda’
Deborah Harlan, ‘The archaeology of lantern slides: the Teaching Slide Collection of the Ashmolean Museum, Oxford’
Jack Judson, ‘The wondrous Brenkert Master Brenograph’
Vanessa Davids and Els de Roon Hertoge, ‘A skull sticker and what it can lead to...’
Ann Hecht, ‘Hermann at home: ‘magic lantern parties’ in the 1970s’
Richard Crangle, ‘Little yellow boxes: family slide shows in the 1960s and 1970s’
Vanessa Davids, ‘Diascoop re-invents the magic lantern: a conversation with Ida Lohman, visual artist’
Carrie Wiltshire, ‘‘What’s that?’: interpreting the magic lantern for museum visitors’
Ludwig Vogl-Bienek, ‘Opera on the lantern stage: Wagner’s Ring and Der Fliegende Holländer as performed by the Illuminago-Theater’
Mervyn Heard, ‘The up-to-date lanternist: shows and showpeople in the 21st century’